That wonderful feeling of being asked to be your friend’s best man at his wedding can quickly be replaced by a sudden feeling of dread when you realise you’ll have to give a best man’s speech in front of loads of people.

Such speeches are meant to charming, funny and witty, and it can be difficult to know where to even start. To help you get started, here are a few do’s and don’ts to help guide you towards crafting a truly memorable best man’s speech.

It is a good idea to remember that a large portion of the guests in attendance at the wedding have never met you before, so introduce yourself confidently and establish how long you have been friends with the groom or why you are so close. This is a great way to ease yourself into the speech with something simple that you shouldn’t even need to script too much.

Another good option when introducing yourself at the beginning of the speech is to reassure the guests that you will be keeping it fairly brief. By doing this you will keep their attention from wandering and they will be more likely to respond positively to any jokes you make.

To ‘improvise’ in this instance doesn’t mean to go off a rambling tangent, but to simply include an off-the-cuff comment about how the day has been playing out so far. There may have been a funny or moving moment to reference, or just some other observation which gives the impression you are relaxed and enjoying the day. Other than that, follow a structure which moves you smoothly through each part of the speech at a moderate pace.

This is not the time for long-winded stories, but be careful not to speed through the whole thing at a hundred miles per hour either.

By including an obvious joke early on in the speech, you reassure the audience that your speech will be one of the fun ones and not another boring snooze-fest. Just make sure it is a family friendly joke that you have sanity-checked with more than one person.

The first joke also doesn’t have to be about the groom or the wedding either. It might actually be more beneficial to establish your humour with a self-deprecating joke which endears you to the crowd. 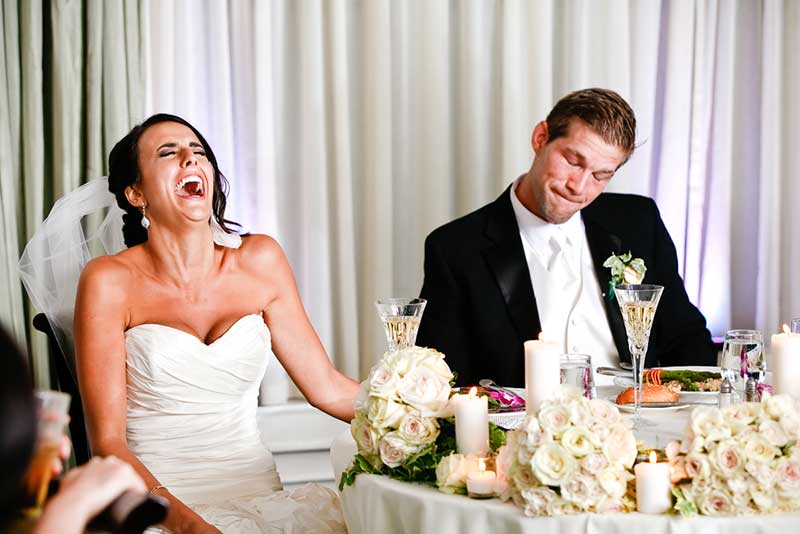 Praise the bride and bride’s family

Obviously you should say something about how beautiful the bride looks as respectfully and politely as possible (keep it generic), but also be sure to add something about what a great person she is as well. Add a detail or two here about why she is a great person or why you think her and the groom make such a good couple to ensure you sound authentic, rather than like you are just ticking boxes off of your speech structure.

Also win yourself some extra goodwill by including praise for her family, especially if they contributed to the wedding organisation. If they contributed a lot then they have probably received plenty of praise already from the previous more serious speeches, but it won’t hurt to touch upon it briefly again.

Describe the groom positively (in a playful way)

A big part of the best man’s speech is his description of the groom, which the bride’s family are no doubt looking forward to hearing more of. All great best man’s speeches comprise of a fond teasing of the groom and some affectionate jokes in the groom’s behalf are likely to be well received and show your longstanding, firm friendship with the groom.

Typically, playful jibes and jokes are the home stretch of the speech, leading into the toasts, so be sure to wrap up with something a little philosophical about love in general and why you believe the marriage of your friend and his bride will be a truly wonderful one.

What Not To Do:

Don’t drink too much

Do not get drunk before your speech. This might actually be a little more difficult than it seems, especially if you are feeling the nerves. Have a glass or two to ease those nerves or to join in a toast but keep it to an absolute minimum until after the speech. You don’t want to be slurring your words or forgetting what you want to say halfway through.

Don’t read straight off the paper

Make sure you have memorised enough of the speech or kept it loose enough for you to speak naturally without reading directly from your notes. Speaking more openly while looking around at the guests and at the groom and bride will appear much more natural and entertaining. There are lots of techniques for memorising speeches you can try.

The best way to structure your speech notes is with bullet points that you can glance over for a cue. Always practice the speech in front of other people before the wedding (friends and family that aren’t attending are your best bet), as practicing it on your own doesn’t prepare you for the nervousness of speaking in front of others.

For an effective best man’s speech, everyone must be able to hear you and understand you. Luckily your speech traditionally comes after the other speeches so you will have the opportunity to gauge the room and see how well everyone else making speeches is making themselves heard. Make sure you don’t mumble!

Don’t be crude or insulting

It can be tempting to go down the crude route in search of a joke, but your speech will be received much better if you keep it clean. It’s okay to have a bit of fun at the groom’s expense, but always keep the jokes family friendly. Also, in-jokes between friends might be funny but they will not translate to the wider audience so keep that kind of thing for when it is just you and the groom and your friends and you can banter to your heart’s content.

Don’t mention ex-girlfriends or ‘the incident’

You may well get a few laughs from reminding the groom of some of his previous relationships that didn’t turn out so well, but this is neither the time nor place for it. This is a celebration of the one relationship that has turned out well, so forget all his previous encounters because references to them will not be welcomed under any circumstances.

Also don’t bring up any seriously embarrassing or shameful incidents from the groom’s past as he has entrusted you with this special moment in his life, so don’t let him down.